In the screenshot below, the desktop/Breeze-looking scrollbar it’s actually a control coming from QtQuickControls2. 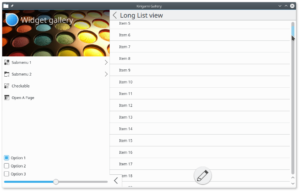 Since one of the goals of Kirigami is to support also desktop applications, while working on Kirigami 2 (that is mostly porting it to be based on top of QtQuickControls2) I had the need for it to continue to integrate with desktop applications as well.
Unfortunately, desktops are not the primary target for QtQuickcontrls2, and while in Qt 5.9 some much needed desktop-related features, such as mouseover effects are getting back in, being as unrecognizable as possible with QWidget-based applications is definitely not in the roadmap.

Luckily, theming QQC2 is easy, so I’ve started a QtQuickControls2 style that integrates with desktop QStyle-based widgets (actually, based upon the QtQuickControls1 QStyle painter machinery).

If we are serious in using QtQuickControls2 in applications shipped together Plasma, we also must make sure they integrate well with the Plasma desktop’s Breeze look and feel.

I started by theming the scrollbar because I felt it was one of the hardest controls to do.
in QtQuickControls2 the scrollbars are supposed to be an attached property of flickables..
This is pretty simple for the mobile use case, turns out it’s a nightmare to create scrollbars that behave like we are used to in the desktop (unless you’re on mac, which insists to look more and more like iOS), which need to be

I’ve been able to do all of the following, tough it’s necessary to reintroduce the QtQuickcontrols1 component called ScrollView (which imo was a mistake to remove in QtQuickControls2) which can correctly lay out and size the Flickable relative to its ScrollBar.
Hopefully, you’ll be soon able to build an application with QtQuickcontrols2 and Kirigami2 that feels right at home in a Plasma desktop.
What about Plasma-themed QQC2 controls for plasmoids? that will come too, of course!