Ok, I lied: it’s about elegance, performance, simple and great API, better user experience, more cross-device compatibility, in the end about improvement on all fronts.

And a very important thing is to gove an user interface more beautiful, tidier, more elegant.
One example is what Sebas talked about yesterday.
That new calendar is kindof a blueprint of how the UI of the Plasma workspace is being reworked: no huge and breaking changes, but fixing small layout problems, paying attention to the visual balance of the elements, and way better typography.
One thing that was pointed out is that its contrast or readability it was still dependent on what kind of wallpaper or windows you have behind it.

That’s what we came up with: 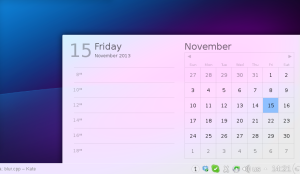 (Note, the panel is from Plasma1, the systemtray and clock area will look much better 😉

Here what it’s changed: contrary to what it seems, the window is *not* more opaque than the screenshots of yesterday, but it’s a modification of the blur effect in KWin.

What it does, it reproduces the effect of seeing something trough a frosted glass: what do you see is a combination of what’s behind the glass, the color of the glass, and the reflection of light reflected by the glass.
This last part is what has been added: it adds a bit of light to the color, but unlike a semi-transparent white window in front, it conserves all the information about colors.
So while being almost white, therefore very contrasted with the text, but still looking happy and colorful, instead of more dull and opaque if the theme was white, 95% opaque.

We saw last week the release of the first beta of KDE Plasma Workspace and applications 4.11

From my side, that’s a very important milestone, because it’s pretty much the coronation of what we intended the 4.x series of the workspace to be. It was a long ride, but I think this future release will be pretty stable and “defined” in its own identity.

This sounds pretty scary, but it indicates a lot of maturity, 4.11 will be a release you can count on being maintained abd bugs fixed for a long time. Nice for home users, utterly awesome for bigger deployments.

Just to clarify: this regards only Plasma Workspace so far. Applications will continue feature releases as usual, after all KDE is not a software, is a community that releases a lot of eterogeneous pieces of software.

So, were are now?

But of course we never are happy: we want to do new things and have new features in the future..

I’ll do a talk about Plasma2 at Akademy, going a bit more in deep about the technology, the big picture concept and how to get involved in, so see you there 🙂

Another Tokamak is over, and a very good one indeed

As you may already know, the new Plasma workspace we are now working on is based on Qt 5, QML2 and KDE Frameworks 5.
The platform will still run on X11, but down the road Wayland support will be added as well, work is ongoing in KWin for that.

First thing, when the new workspace based on that new technology will be released?

When is ready, where ready means there are no significant regressions left, so there will be a big technology change, but no significant disruption on the user interface.

There will be some small changes however, because the incremental improvement of the UI is a process that never stops. The login screen, the splash screen, the lock screen, the logout dialog and the fast user switching interface will look consistent all across the board, with a single, coherent QML theme for all those elements. As a side effect will make very easy to heavily customize the look and behavior of those components, either by users or vendors.

As the components mentioned before, also the shell itself will be defined by a single package.

This packae will define things such as the behavior of the desktop (icons? what plasmoids? what default wallpaper?), of the panels (how many? where?, what they do contain?), of the run command interface, and so on.

It will be possible to change this shell package at runtime, this means that user experiences such as Plasma Desktop, Plasma Active and Plasma Media Center can be loaded on the fly, on the same device and only when needed. You have a Plasma Active tablet that comes with a docking station? attach it and you’ll have Plasma Desktop on your screen. You attach your laptop to your 40 inch TV, and you get Plasma Media Center.

One interface does not fit any device, but one technology does, especially when it can give you an user interface always optimized for the device you are using in a particular moment.

Pretty busy days here at Randa. On the Plasma front some important decisions have been taken and a lot of work is now being done in this direction.

There is now a big traction in rewriting our current plasmoids in QML, such as the notifications I talked about some days ago, and many more that are coming.

The plan for the future is to have 100% QML-based workspaces, with as little changes as possible feature-wise compared to the current one, just with a smoother feeling 😉

This is only the first part of the road, and this is arriving already today, with each release of the Desktop workspace more complete, while Active is already 100% QML from day one.

What will happen next? Together with Qt5, there will also be the release of the next major revision of QML, that expands the language and changes the technology behind. Among the other things, everything will be on an opengl scene and the JavaScript bits will be managed by V8.

This comes at a price: only pieces of the user interface that are written in QML can be loaded in an environment based off QML2. hat means the old code based on QGraphicsView (and part of the old C++ API) has to go.

This wasn’t an easy decision, but it will make things dramatically easier in the future.

This is a long term plan: The work on the new Plasma library version started now, and we expect a working shell based on the new framewok and Qt5 in about 18 months or so.

I’ve just got a first preliminary version of libplasma building without QGraphicsView dependencies, and the binary is about two thirds of the size it had before, so this is an encouraging start 😉

It’s again an exciting time when we can design a new architecture, have crazy ideas, trying them out, and any input or help is very appreciated.

You can see the progress of the tasks that are added as the work proceeds here, and talk or claim some tasks for yourself at the usual channels of communication, plasma-devel@kde.org or the #plasma freenode IRC channel.