Over the last few days I decided to help Martin a bit with the ongoing effort on Wayland, since there are still many parts of work missing in order to have a full Plasma Wayland session to just work, but it’s impressive how fast it’s getting there.
It was just a tiny part but is worth sharing it as it brings pretty pictures! (and shows how easy is to contribute).
The popups of the plasma shell need custom positioning code as normal applications can’t position themselves anymore for security reasons, plus KWin uses its effects framework to do a couple of things on plasma panels and popups:

After hooking a protocol to control such effects into wayland, here’s the result, almost undistinguishable (there is still a pretty visible graphical issue, points for finding it) from your current X11 Plasma 5.4 session: 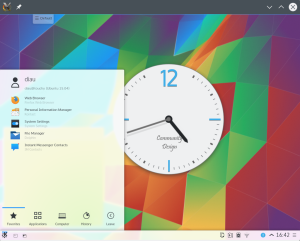 So, what needed to be done?

As an “user” of the infrastructure, I’m very impressed about the work that went in the Wayland port of KWin and from the KWayland framework: it really makes using a very challenging and “peculiar” plain C API very easy and elegant in a way familiar with our cozy C++/Qt world.
I can say that is a learning curve soft enough for everyone to jump in and help the big scary transition if they feel to.

7 thoughts on “There is a Blur in my Wayland”