In the ever expanding catalog of applications based upon the Kirigami framework and design language, I’ve just published a small one, tough quite useful if you like me have the weird hobby of rock climbing 🙂

It’s called Klimbgrades and it’s not much more than a conversion table between different grading systems for rock climbs (separed by lead and bouldering) used around the world.

At the moment the supported grade scales for lead are French, YDS, UIAA, British Tech and British Adjectival

the grades for Bouldering are Fontainebleu, Hueco and B Grade

You can grab it on Android from the Play Store, or build it from source for yourself either for your desktop or cross-compile it over Android.

From the screenshots you can see there is some amount of automatic adjustment between the mobile and desktop versions, both in terms of style and layout/functionality. 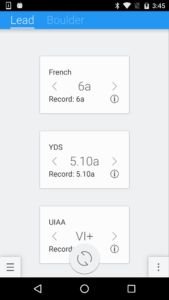 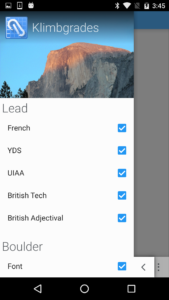 On a Plasma Desktop: 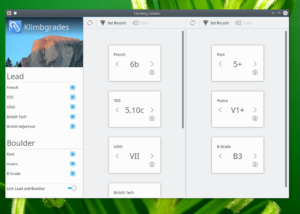